What Is a Homunculus?

A homunculus is traditionally a form of artificial life created by alchemy or magic. Vaguely human shaped, the homunculus serves as a companion, helper and possibly a surrogate child for its creator. Popularized in sixteenth-century alchemy and nineteenth-century, it has historically referred to the creation of a miniature, fully formed human. The concept has roots in preformationism as well as earlier folklore and alchemic traditions.

Despite the name, they are not necessarily small, some homunculi are described as man sized and how man-like they are varies from account to account. This may be a function of how the creature was made and/or the skill of its creator while some are recorded as being able to speak, but most are mute. Other common unnatural features include wings, beaks, claws and fur. In a fantasy setting they may be hard to distinguish from imps and may be mistaken for a familiar (or may be a common disguise for familiars). In some accounts the homonculus will bear a more or less grotesque resemblance to its creator.

Methods of creation vary but most seem to be enthusiastic about the use of human semen which would seem to re-inforce the “surrogate child” theme and blood. Other methods involve a mandrake, a herb deeply entwined with human fertility, and retorts packed with herbs and and/or animal parts and incubated in baths of sand or manure for a given time. Sometimes the creator frames the creature’s body with metal wire and/or clay and sometimes not; a man-sized homunculus could even be cast onto a human skeleton. Of course, one could use the skeleton of a child or a monkey for a smaller creation. Perhaps the simplest method recorded involved injecting semen into a fresh hen’s egg, sealing the hole with parchment and then burying it in dung until it hatched.

It is said that homunculus possibly possesses no soul but it may, however, share part of its creator’s soul if that is what clones do under the laws of magic. This may make it more or less susceptible to magic. It is entirely normal for a homunculus’ master to be able to conduct remote viewings through his creature’s senses, for this may be an inherent ability or normal scrying magic with an improved focus. Harming the homunculus may or may not harm the creator, but it’s likely that access to one will provide substantial sympathetic benefits to magic aimed at its creator. Since it is likely to be made of a piece of him or her, it will probably provide a strong link under the magical law of contagion.<

The Alchemical Creation of Little People with Great Powers

Although science has made much progress in the last century, there are still numerous ethical issues that need to be addressed by the scientific community. One such issue is that of the creation of artificial life. For some, this is the logical progress of scientific knowledge; for others, this is a realm that should not be intruded by human beings. Concepts relating to the creation of artificial life such as genetic engineering and human cloning are relatively modern scientific ideas. In the past, however, it was in the field of alchemy that Medieval scientists sought to artificially create life. One of the beings that alchemists were purportedly able to create was the homunculus, meaning ‘little man’ in Latin.

The homunculus is first referred to in alchemical writings of the 16 th century. It is likely, however, that this concept is older than these writings. The idea that miniature fully-formed people can be created has been traced to the early Middle Ages (400 to 1000 AD), and is partly based on the Aristotelian belief that the sperm is greater than the ovum in its contribution to the production of offspring. 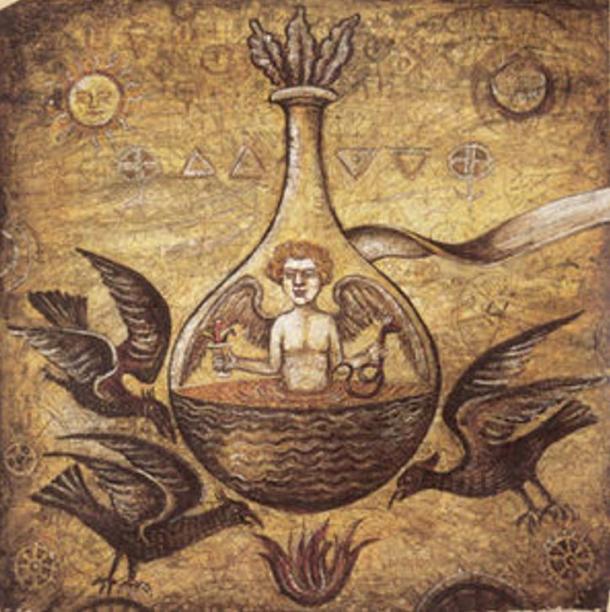 Alchemical illustration of a Homunculus in a vial ( new-moster.wikia.com)

The first known account of the production of the homunculus is said to be found in an undated Arabic work called the Book of the Cow , purportedly written by the Greek philosopher Plato himself. The materials required for the creation of the homunculus include human semen, a cow or ewe and animal blood, whilst the process includes the artificial insemination of the cow / ewe, smearing the inseminated animal’s genitals with the blood of another animal, and feeding it exclusively on the blood of another animal. The pregnant animal would eventually give birth to an unformed substance, which would then be places in a powder made of ground sunstone (a mystical phosphorescent elixir), sulphur, magnet, green tutia (a sulphate of iron) and the sap of a white willow. When the blob starts growing human skin, it would be required to be placed in a large glass or lead container for three days. After that, it has to be fed with the blood of its decapitated mother for seven days before becoming a fully-formed homunculus. 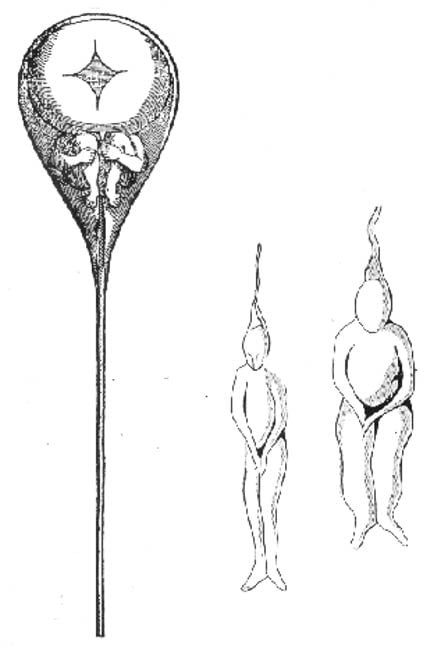 A tiny person inside a sperm as drawn by N. Hartsoecker in 1695 (public domain )

In the Book of the Cow , there are two similar procedures for producing the homunculus. Instead of a cow / ewe, a female monkey is used in one, and an unidentified female animal in another. Additionally, different ingredients are used for the powder, and the incubation period of the blob in the vessel is extended to 40 days. All three types of homunculus have their own specific functions. 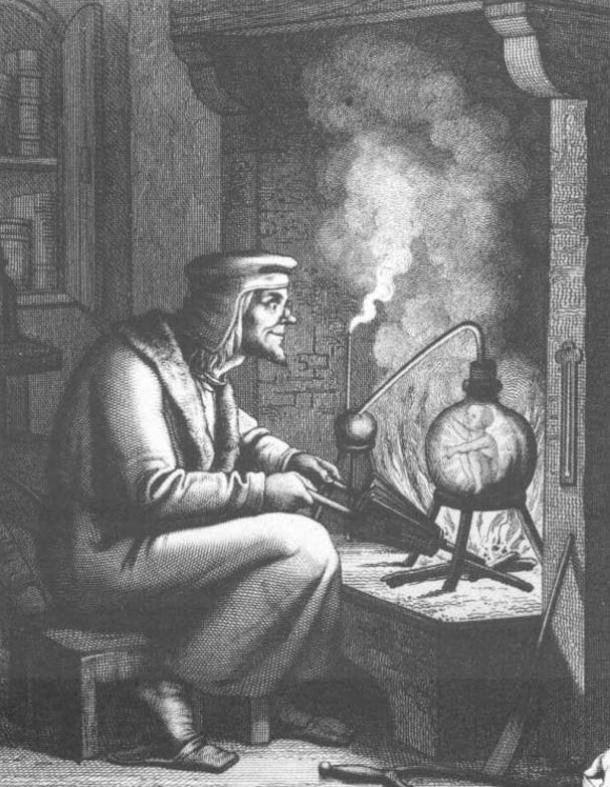 The 16 th century alchemist, Philip von Hohenheim, known also as Paracelsus, provides a different recipe for creating the homunculus in his work, De Natura Rerum . This recipe uses a horse as the surrogate mother of the homunculus, and the semen of a man is left inside the animal’s womb to putrefy for forty days, before a little man is born. Rather than using the homunculus to perform magical feats, Paracelsus instructs that the homunculus ought to be “educated with the greatest care and zeal, until it grows up and begins to display intelligence.” Paracelsus also claims that the procedure for making the homunculus is one of the greatest secrets revealed by God to mortals, perhaps suggesting that the creation of artificial life is divine wisdom that may be used by human beings.

Scientists today dismiss the work prescribed by the Book of the Cow and Paracelsus’ De Natura Rerum as mere fantasy, while others suggest the writing was intended to be taken symbolically, rather than literally, and contains hidden messages regarding the process of spiritual ascension.  Nevertheless, the goal of producing the homunculus, i.e. the creation of artificial life, is a quest that some are still pursuing today.

How to Make a Homunculus

In researching “How Frankenstein’s Monster Works” (and the podcast episode), I did quite a bit of reading about the homunculus. If you’re not hip to this terminology, all you need to know is that a homunculus is an artificial humanoid created through alchemy. While not quite a human, this creature is a “rational animal” and another fictional page in humanity’s dream of mastering life and death.

The medieval text known as the “Liber Vaccae” or “Book of the Cow” lays out some rather grotesque and confusing instructions in the art of DIY homunculi brewing — and Maaike Van der Lugt‘s “Abominable Mixtures: The Liber vaccae in the Medieval West, or The Dangers and Attractions of Natural Magic” really lays out some excellent commentary on what it all means.

Allow me to break it all down into some quick bullet points. Be warned that this is all rather grotesque. Also, please do me a favor and don’t actually attempt this at home.

At this point, the text indicates that the cow or ewe should give birth and the resulting “unformed substance” should be placed in the powder you just prepared — which will cause the amorphous blob to grow a human skin.

Next, keep the newborn homunculus in a large glass or lead container for three days. The creature will become crazy hungry in this time, so you’ll then feed it the blood of its decapitated mother for seven days. In this time, it should develop into a full-grown tiny, grotesque humanoid with some fragment of a human soul.

Now what, right? Well, as it turns out, the homunculus has many uses for a practicing medieval sorcerer:

If it is placed on a white cloth, with a mirror in its hands, and suffumigated with a mixture of human blood and other ingredients, the moon will appear to be full on the last day of the month. If it is decapitated, and its blood is given to a man to drink, the man will assume the form of a bovine or a sheep; but if he is anointed with it, he will have the form of an ape. If the homunculus is fed for forty days in a dark house, on a diet of blood and milk, and then its guts are extracted from its belly and rubbed onto someone’s hands and feet, he may walk on water or travel around the world in the winking of an eye. Kept alive for a year and then placed in a bath of milk and rainwater, it will tell things that happen far away.

Oh, and then there’s this perplexing bit about turning a decapitated cow into a swarm of bees:

The fourth experiment describes an elaborate procedure to generate bees from the corpse of a decapitated calf. This involves locking up the corpse in a dark house with fourteen closed windows on the East, blocking all its body orifices after having reattached the head, hitting it with a large dog’s penis, extracting the flesh from the skinned corpse, grinding this with a certain herb, and leaving the mixture in a corner of the house, until it will be converted into worms.

I trust you’re properly grossed out by this point, so I’ll skip to the part where I frame all of this in some sort of scientific reasoning.

As alarming and grotesque as these ideas are, they underline the mindset of the alchemist, who wandered a meandering path of chemistry, philosophy and superstitious occultism on the quest for knowledge. At the time, it was widely believed that humans could mimic and manipulate natural reproductive processes — especially when it came to simpler organisms such as bees. And it was still an age in which spontaneous generation seemed a sensible explanation for maggots in your meat.

As crazy as these ideas seem, they underline what our ancestors thought was possible. And as we continue to venture into an age of genetic manipulation and human cloning, who’s to say they were wrong?

But again, do not try this at home.

Lamb, R., 2011. How to Make a Homunculus and Other Horrors. [Online]
Available here.